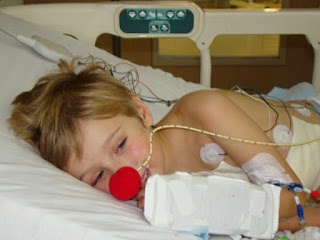 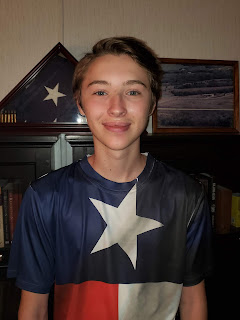 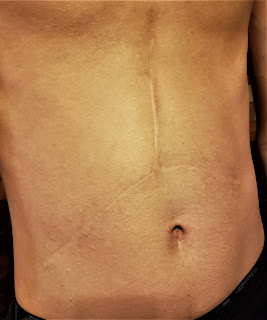 Are not all angels ministering spirits sent to serve those who will inherit salvation? Hebrews 1:14 NIV

I would like to say that the photo of the “abs” is me, but alas, my fifty-eight-year-old abs are not that lean! The photo is, of course, the abdomen of my son, Galen, displaying the three, very-long incisions (shaped like the Mercedes-Benz insignia) from his liver transplant on July 10, 2008, eleven years ago. And although the scars have significantly diminished over these years—at age five then and age sixteen now—they are still a visible sign of his journey. Clearly evident are also the numerous point-insertion scars from the metal staples holding those original incisions together.
So what is the purpose of this anatomical analysis? Well, here is a bit more of the story of Galen’s transplant journey.

Galen was back in the ICU room after a successful liver-transplant surgery and was being monitored tenaciously. God had miraculously provided for one life to live through the tragic loss of two young children, brother and sister, who had just drowned in their family’s pool. Elation and sorrow are difficult emotions to balance. A roller-coaster ride of emotions and unanswerable questions is what this life event dumped into our unsuspecting laps.
But something just wasn’t quite right with Galen. We all knew the extensive toll that Galen’s liver failure had placed on his entire body and knew recovery was never fully certain or what potential permanent damage possibly had already occurred. You see, over the next couple days during the brief moments he was fully awake and aware—eyes scanning the room, us, and his own unimaginable condition—Galen never spoke a word in response to us or his surroundings. It was very uncharacteristic of this normally gregarious young boy and we were concerned that toxic ammonia had caused some permanent brain damage to his speech centers. Certainly, he was in a state of emotional shock as well, wondering what had happened, not fully remembering all the prior events, and now a stomach with huge incisions held together with staples.
They rushed Galen back down to surgery on the second day after the transplant as the doctors suspected that he was bleeding internally—and he was. They restitched the torn blood vessels back together and removed a pint of blood that had escaped into his abdominal cavity. To everyone’s surprise and elation, upon Galen’s return to the ICU room, he was talking! The doctors and nurses were astounded as they witnessed for the first time the gregarious Galen, who previously had been lifeless, unresponsive, and limp. After a few days, they moved Galen back down to the main ward, the “dungeon” as Galen would call it, the old Parkland Hospital in Dallas at that time.

Galen has only two solid memories of the ICU before his transplant surgery. One was his outburst when a nurse tried to get him to sit on the toilet. And the other—well—this is where things get a bit more spiritually—and angelically—interesting.
Galen clearly recalls a time in the ICU when an attractive lady wearing a long, white lab coat, wearing bright red lipstick was talking to Kim, his mother, in the room about Mary Kay cosmetics, which, in fact, Kim was active with at the time. What was so striking to Galen was the fact that on the ICU ward no lipstick or makeup or perfumes were typically allowed for staff due to the potential sensitivities of the patients, and Galen somehow knew that. It was only much later that Galen even related these experiences to his mother and me. And, of course, Kim has no recollection of any such event or lady. A dream? Imagination? Even for a five-year-old boy, even under the circumstances, I think not. Certainly, an angelic presence of comfort and peace signifying that soon all will be normal again and well.
And Galen had another, even more profound visitation. A few days after both surgeries concerning his transplant, now in the main ward of the hospital, the “dungeon,” Galen very clearly recalls this second event. Mom was in the shower in his room, and I evidently had now returned back to work during the daytime hours. Another, different lady with long, brown hair, wearing navy-blue scrubs walked into the room and spoke directly to Galen, who was quite awake and sensible. Paraphrased, she stated to Galen, “These staples have been in long enough, it’s time to take them out!” And she proceeded to bring forth a standard, office-supply staple-remover and used it to remove one staple from the top of Galen’s vertical incision, from a position nearest his heart. And then she simply left. Of course, Galen felt nothing, and medically, the staples were not removed till weeks later.
Since Galen never told us about this visitation until much later, nobody ever bothered to check or count the staples or noticed anything noteworthy or out of the ordinary. But the visitation assuredly happened, and maybe as if to tell Galen that your healing and new life journey have just begun, and God and His angels are with you.

I do not know if a gold staple will be waiting for Galen in heaven, but I do know that angelic encounters of various kinds happen frequently. I know many friends who have had direct spiritual angelic contact and I personally have had two angelic appearances in dreams. As the above Scriptures testify, it is a spiritual reality.

But the story is still being written, and seven years later Galen is in the hospital again to have surgery to place a stent in his bile duct to keep it open. Unknowingly at the time, a blood vessel was inadvertently nicked from the endoscopic surgery, and Galen once more was bleeding internally and not doing well. I was at the hospital with Galen and my friend, Edwina, had come by to place some decorations on Galen’s hospital room window. Edwina has had a significant life journey of her own and is very spiritually aware and sensitive to angelic and heavenly signals and signs. After she had completed the window decorations, I noticed that she was peering intently out the window. She turned to look at me and exclaimed, “Do you see them? They are coming right through the window and heading straight for Galen!” Edwina saw two white “tufts,” one positioned slightly higher than the other, moving parallel together in a direct straight line to Galen’s side. The tufts seemed to vanish when they reached Galen, but Edwina continued to sense their presence. Neither Galen nor I saw anything. But in my mind, they were, no doubt, Galen’s two guardian angels returning to render him aid.
At that time, Edwina knew nothing about Galen’s previous angelic encounters, as I had never told her as I myself had forgotten. And sure enough, the next day they did surgery again and found Galen’s bleeding blood vessel and clamped and sealed it.

Spiritually, we are never alone. The Holy Spirit and the Living Word of Jesus reside within us. The heavenly angels surround us and are in our midst. They are messengers of our loving God to aid us and comfort us in our direst times of need. Most of the time they are in the unseen spiritual realm, but occasionally they make themselves known—if we are spiritually open to receive them.
“See that you do not despise one of these little ones. For I tell you that their angels in heaven always see the face of my Father in heaven. Matthew 18:10 NIV

And Elisha prayed, “Open his eyes, Lord, so that he may see.” Then the Lord opened the servant’s eyes, and he looked and saw the hills full of horses and chariots of fire all around Elisha. 2 Kings 6:17 NIV

[Part 1 of Galen's Liver Transplant story can be found on my Resources page on my website titled "Miracles Happen," a direct excerpt from Restore My Spirit, O God, pages 268-269.]
Posted by Jeffery J Horacek, O.D. at 10:04 AM No comments: